The haven-associated US Dollar and Japanese Yen plunged lower towards the tail-end of the session while the AUD/USD and EUR/USD exchange rate’s clawed back lost ground.

Gold dipped slightly lower as yields on US 10-year Treasuries dipped back below 70 basis points. 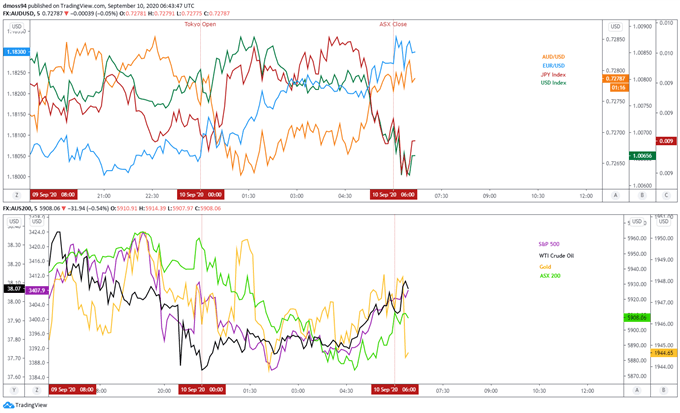 ECB Rate Decision Could Weigh on The DAX 30

Germany’s benchmark DAX index is at risk of reversing lower if the European Central Bank opts to maintain the status quo at its upcoming monetary policy meeting.

Recent comments from Isabel Schnabel suggest that the ECB is reasonably content with its current policy settings, as Executive Board member stated that “as long as the baseline scenario remains intact, there is no reason to adjust the monetary policy stance”.

Although the central bank’s policies were calibrated “based on the June projections”, Schnabel appears confident that while “we are seeing a certain resurgence of infections, at the moment it looks unlikely that we are going to see a full lockdown again [which] is precisely what we assumed in our baseline scenario in June”.

However, recent economic data shows that the trading bloc’s recovery from the doldrums of March may have slowed in recent weeks, as construction PMI figures for August signalled the sixth consecutive monthly contraction in sector activity and the trading bloc’s inflation rate fell 0.2% percent year-on-year.

That being said, it appears relatively unlikely that the ECB will look to introduce additional stimulus measures at its upcoming meeting after some committee members stated that “the flexibility of the pandemic emergency purchase programme suggest that the net purchase envelope should be considered a ceiling rather than a target”.

With that in mind, the absence of aggressive forward guidance may weigh on regional asset prices if EU policymakers fails to soothe concerns that further loosening of monetary policy conditions is not yet on the horizon. 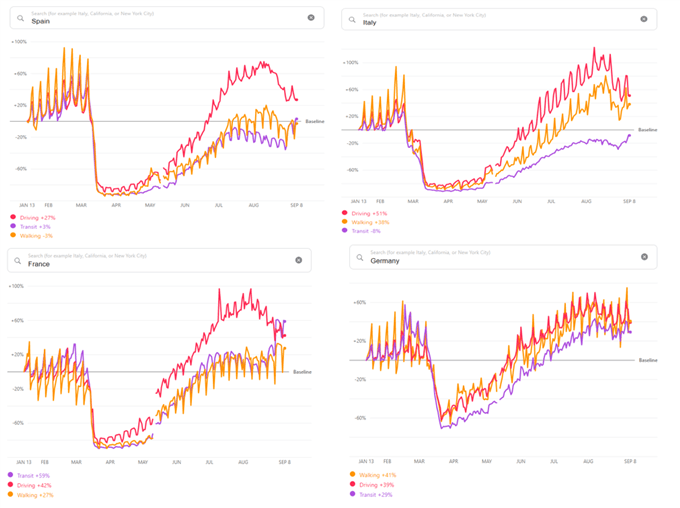 Germany’s benchmark DAX 30 index could reverse lower in the coming days as buyers struggle to overcome key resistance at the July high (13315.6) and the RSI fails to break above 60 into bullish territory.

Furthermore, volume appeared to drop off significantly yesterday despite price surging 2.71%, which could be indicative of fading bullish momentum.

With that in mind, a pullback towards Ascending Channel support looks to be in the offing if the DAX 30 is unable to remain constructively positioned above the yearly open (13126.5) and 21-day moving average (13023.7).

Conversely, a daily close above the monthly high (13464.2) would probably validate bullish potential and carve a path to test the record high set in February (13828.8).

September 30, 2020
Ticker Tape by TradingView
No Result
View All Result